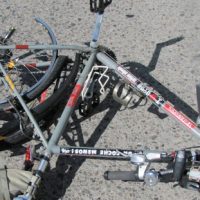 A bicyclist was struck and killed by a driver who fled the accident scene. According to the reports, a red truck struck the bicyclist from behind as the bicyclist and truck traveled on a highway near the Chelan Airport. The police later found the red truck abandoned in a field.

Hopefully the police will find the driver and bring him to justice. The family of the bicyclist can also hopefully find a way to pursue a lawsuit against the driver who caused this accident and cowardly fled the scene. This is a good reminder to all motorists to watch out for bicyclists and yield the right-of-way to bicycles. It is summer and a lot of cyclists are out enjoying the nice weather.

In this instance, the bicyclist’s own insurance may be a source of recovery for his family. If the cyclist owned a car, his own insurance under his Uninsured Motorist Coverage will pay for damages caused by the driver who fled the scene. Here’s our section on Uninsured Motorist Claims. The driver who fled is often called the “phantom driver.” If there is clear evidence of a collision between the truck and car, the uninsured motorist coverage can be a source of recovery.