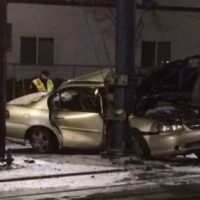 Komo is reporting a fiery crash in south Seattle on Saturday. A female driver caused a single-car link to single car crash type crash when she ran into a light pole and ended up blocking the light rail train for a period of time. The driver also fled the scene on foot, another example of a hit-and-run accident link to hit-and-run accident type.

In this type of accident, the passenger certainly could bring a claim against the driver for her negligence. Hitting the light pole certainly is evidence that she was driving negligently. It will be interesting to see if this ends up being an instance of driving under the influence which could expose a bar owner to a dram shop action if the driver was overserved at a nearby bar or restaurant.

This accident reminds me of the Washington Supreme Court Case titled Geschwind v. Flanagan. In that case, a jury found an intoxicated passenger to be more at fault than a drunk driver who ran off the road and injured the passenger. Even though the driver was drunk, the jury determined that the passenger should have known that he was drunk and was even more negligent for riding with the drunk driver than the drunk driver was for running off the road. The legislature responded to the court decision by amending the controlling statute to essentially eliminate this rather absurd outcome.