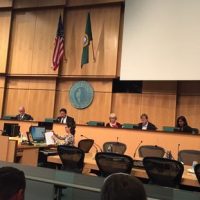 On September 19, 2016, the Seattle City Council passed a bill that will give some workers more secure schedules. The bill, which will go into effect in September 2017, offers several protections to covered employees. The bill requires employers to give employees their schedules at least 14 days in advance. If an employer cuts or adds hours without sufficient notice, the employee is entitled to extra pay. The bill also requires employers to give extra hours to current employees rather than hiring new workers. Finally, an employee’s shifts must be at least 10 hours apart. The new law will apply only to retailers and fast-food companies that employ 500 or more employees in Seattle or nationwide.

By Emerald Law Group | Posted on October 17, 2016
« Marijuana and Impaired Drivers – Car Accidents in Washington
Slip and Falls From Ice and Snow »